My 8 hour adventure on Rügen island, in East Germany

Looking for a fairy tale island with stunning architecture, amazing nature with a rich local food culture? Then exploring Rügen island may be for you.

In the middle of August I got the offer to join an intensive one day exploration adventure on the East German island Rügen. The island is located in the North East of Germany and is connected to Sweden by a handful of ferries (it takes about 4-7 hours depending on the ferry and location you choose). Being a lover of all things German and the fact that I’ve seen plenty of beautiful photos of the nature in the area, I could not resist that offer.

Leaving Trelleborg in an unchristly hour, our group took a ferry to Sassnitz including two cars to carry us on our daily adventure on the island. Since we left in the wee hours in the morning, we opted for breakfast on the ferry that do offer a breakfast buffet – however not that much in terms of vegan options are available. We however, as the vegans in the group got special treatment since our colleague and tour guide had called ahead and warned the staff who had prepared a enormous vegan breakfast for us. The restaurant staff had really gone out of their way. Which was much appreciated.

Having breakfast while watching the ocean was really pleasant and once the four hour crossing was finished, we jetted off to do some sightseeing before heading into the small town of Binz. This is such a quaint city by the sea with plenty of beaches and old health resort buildings that now functions as hotels with spa’s. 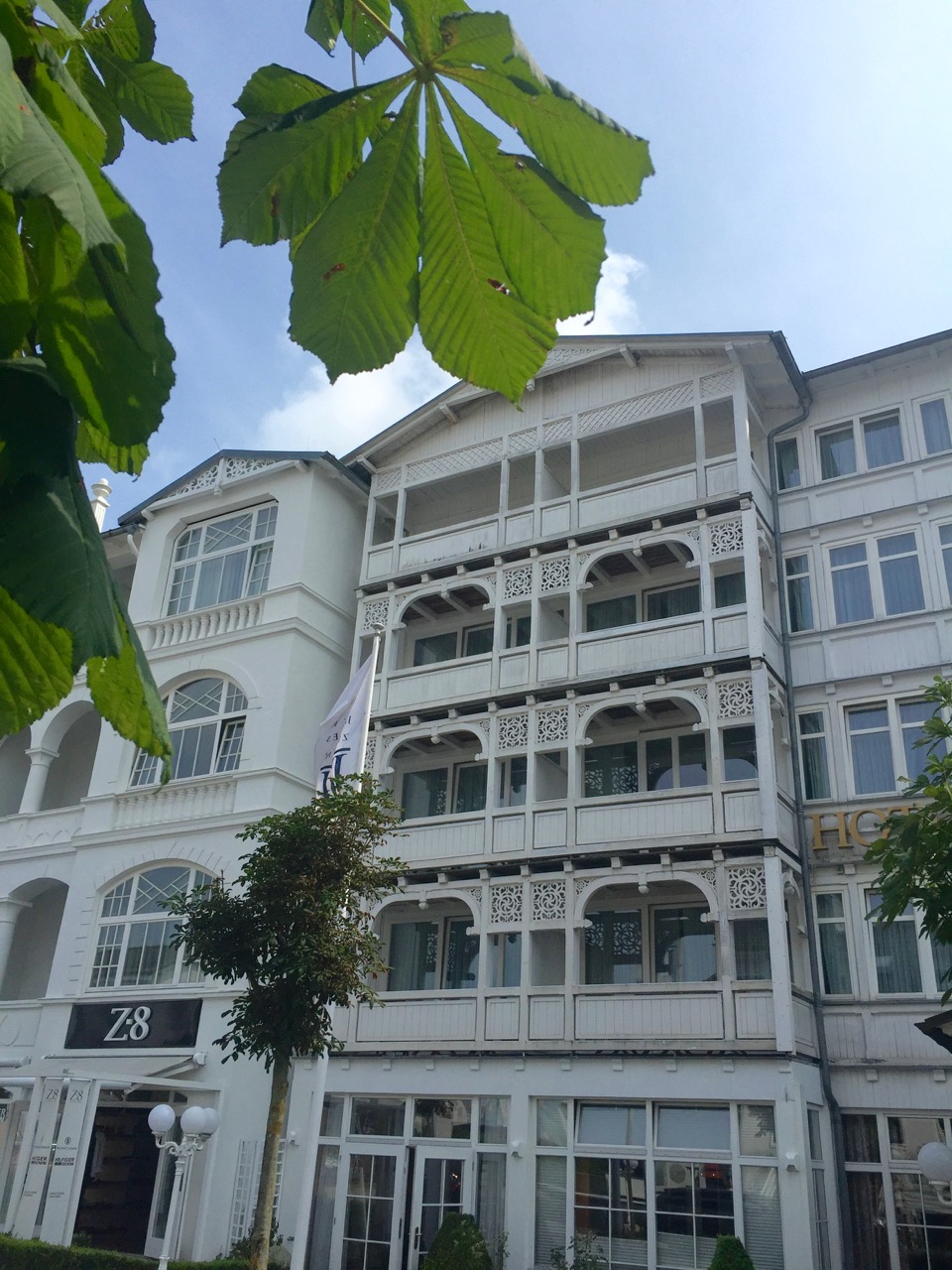 This small town offers plenty of small shops which you can enjoy in a leisurely pace, located in small cute buildings. The entire town centre is made up of these ornate wooden houses, so it feels like you are walking in a fairy tale town.

Rügen is famous for their extensive use of Buckthorn. So if there is something in terms of local delicatessen which is vegan, that you should pick up while you are there, it’s definitely something produced locally containing Buckthorn.

The only place I know, since time was limited and we were only in Binz for lunch, is
Peter Pan, (which our tour guide researched for us) which is very similar to Hans Im Glück (perhaps same chain and owners?!) with a selection of vegan hamburgers, and of course, there were sweet potato fries (they were pure perfection in texture!) and plenty of vegan friendly condiments to add, at each table. 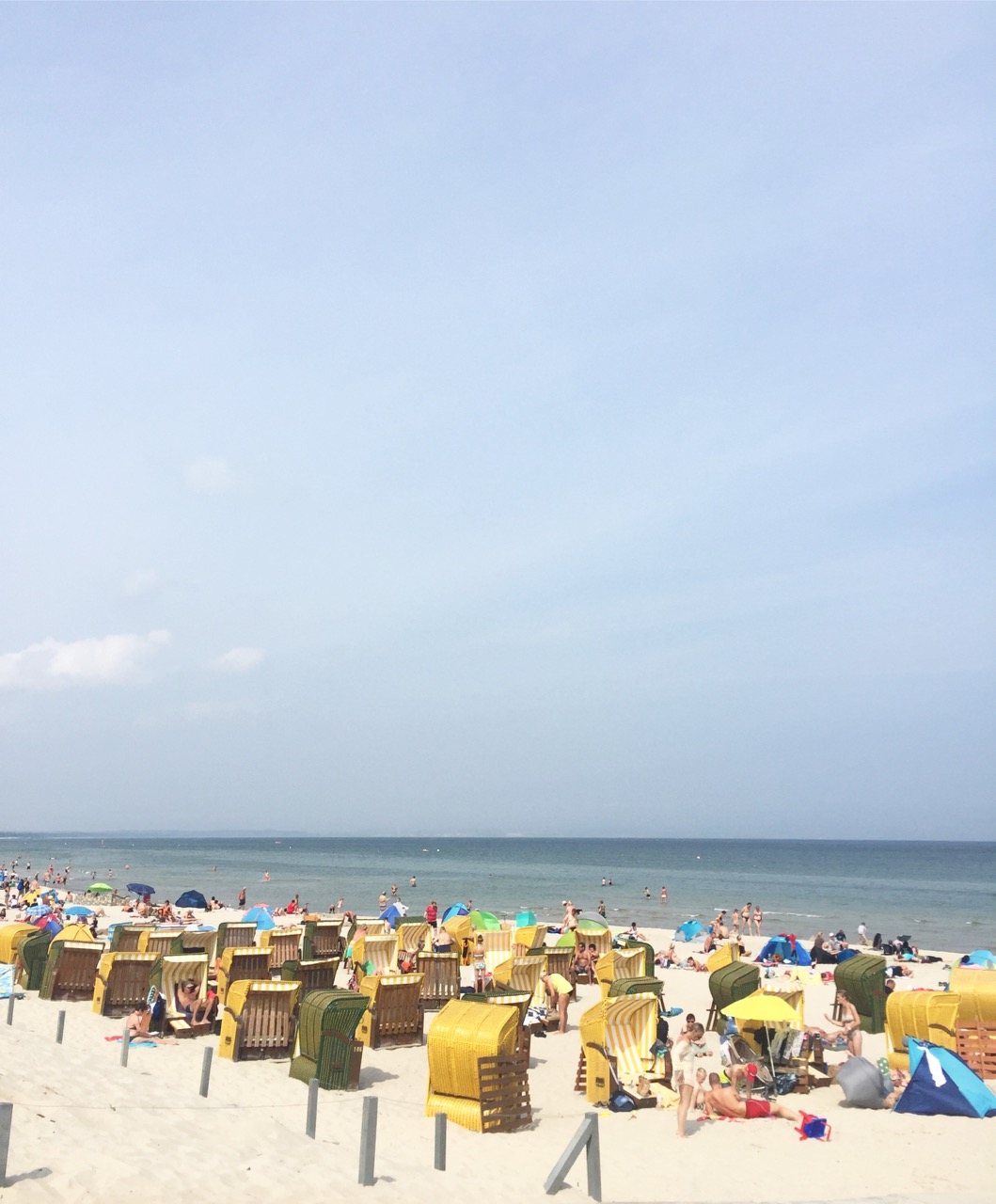 After a very short stroll along the beach, marveling at both nature and architecture it was time to jump back into the car and head off to Karls Erlebnisdorf Zirkow which is a very fun, yet strange place (but in a good way). It’s something that needs to be experienced. Karls Erlebnisdorf Zirkow is a mix between a food market, where they also make their own jam, bon bons and so forth, but also is home to a massive play park with farm animals.

The food market also have a food court, however I never tried any food s we just came from a huge lunch. This is a perfect place to stroll and look at local produce and buy a few local items. Do beware of some of the items, which contains carmine as food colouring, if this is something that you avoid, make sure to check the labels carefully.

I wish we had more time to explore this place and believe me I want to go back to explore the play park or whatever you can call this because they had some neat things to climb, ride and explore (mainly for kids but I don’t care!)

Since we didn’t have that much time to spend at Karls Erlebnisdorf Zirkow we had to get going as we had a very important appointment to keep at the Insel Brauerei. 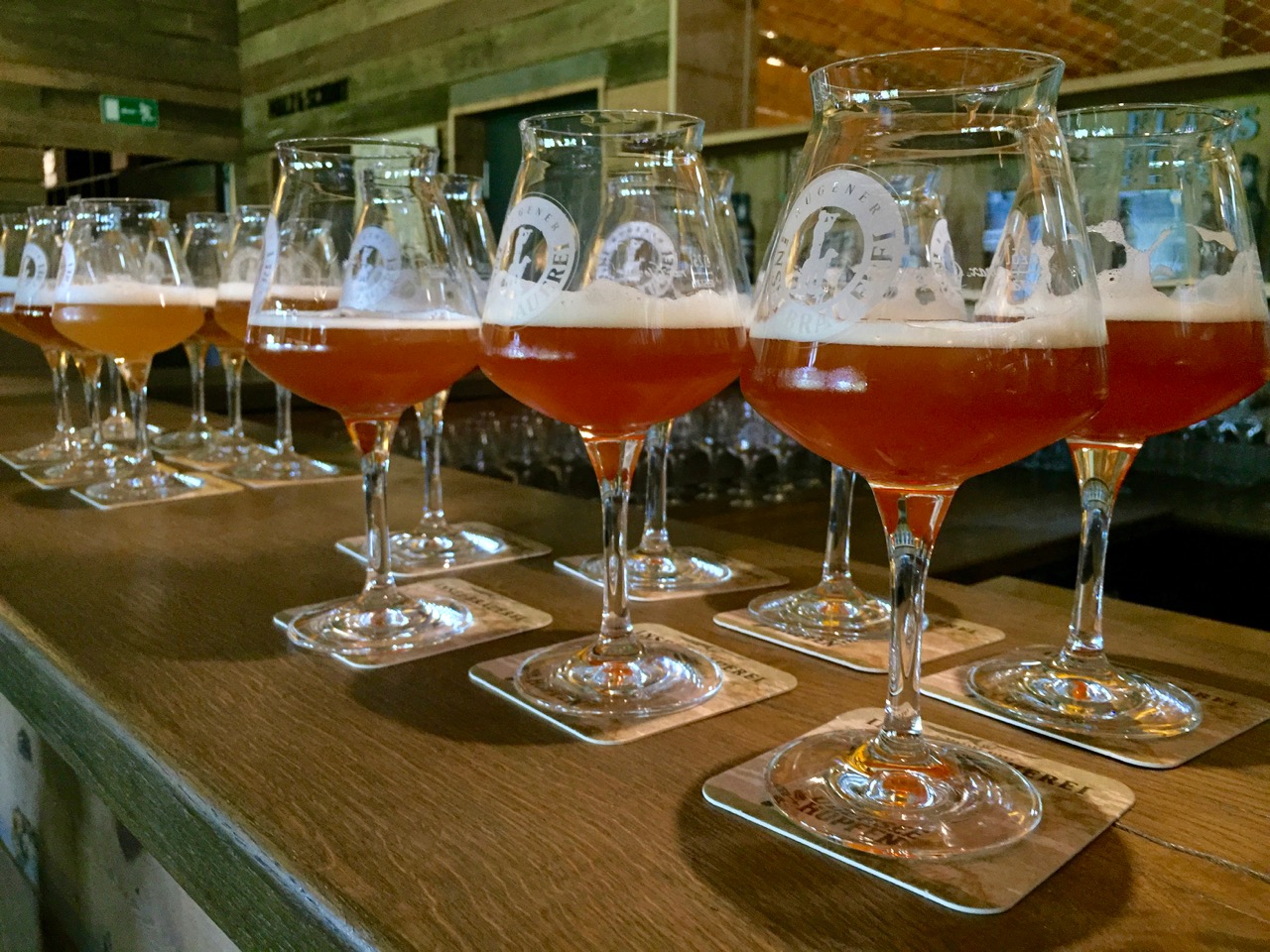 At the brewery, we got to test taste 4 different kinds of beers. They each had a distinctive flavour and character. Two of them were actually awarded for their taste. Of course you could buy beers to to take home, and I most definitely did. These are the three various types of beers I had to bring with me: 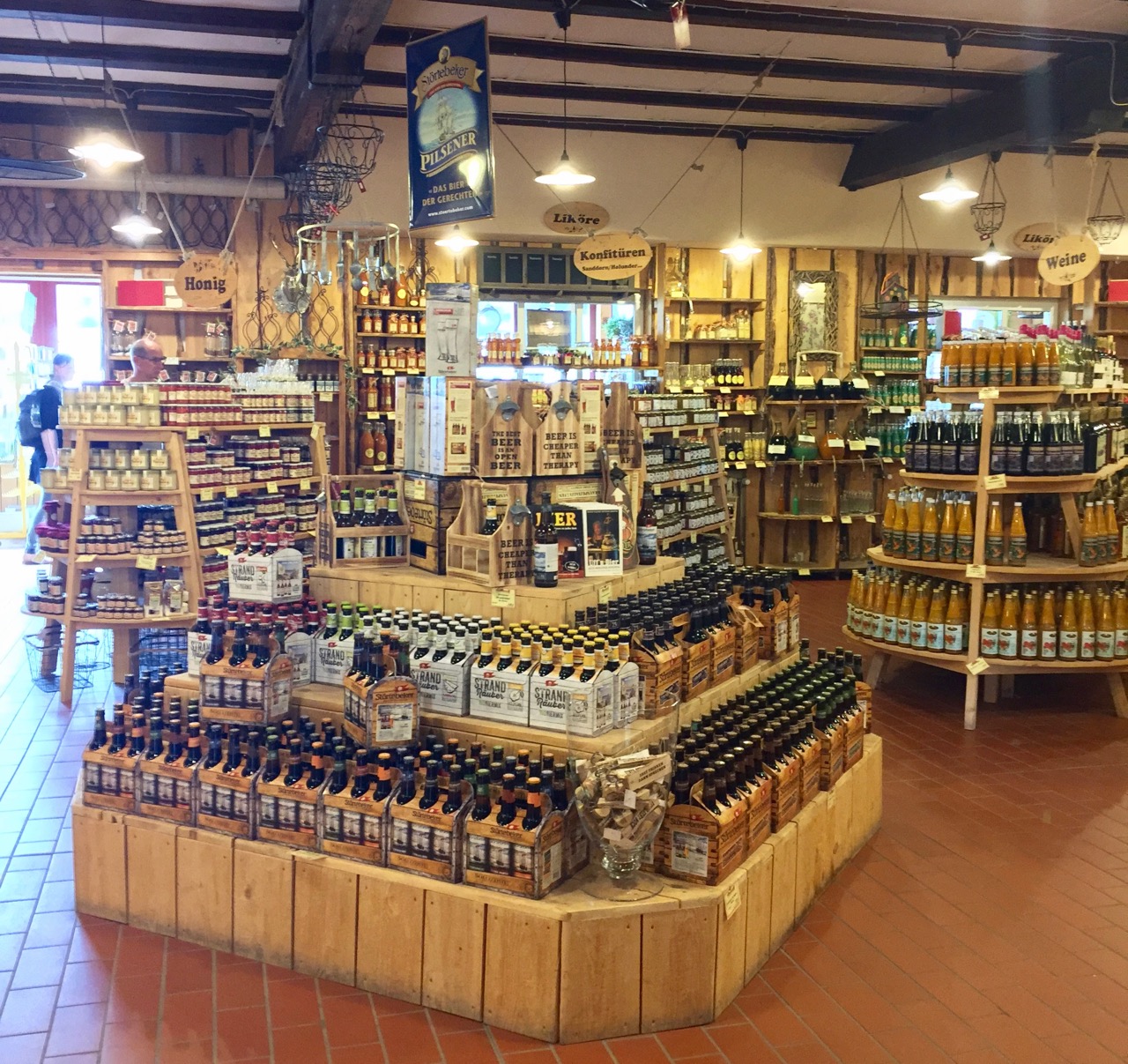 In the nearby buildings they also have some restaurants and a food market in a barn, filled with spices, marmalades, teas, candy, liqueurs and other local produce. A perfect spot to explore and much more low key and calm then Karls Erlebnisdorf Zirkow and a more varied selection of local groceries to discover. 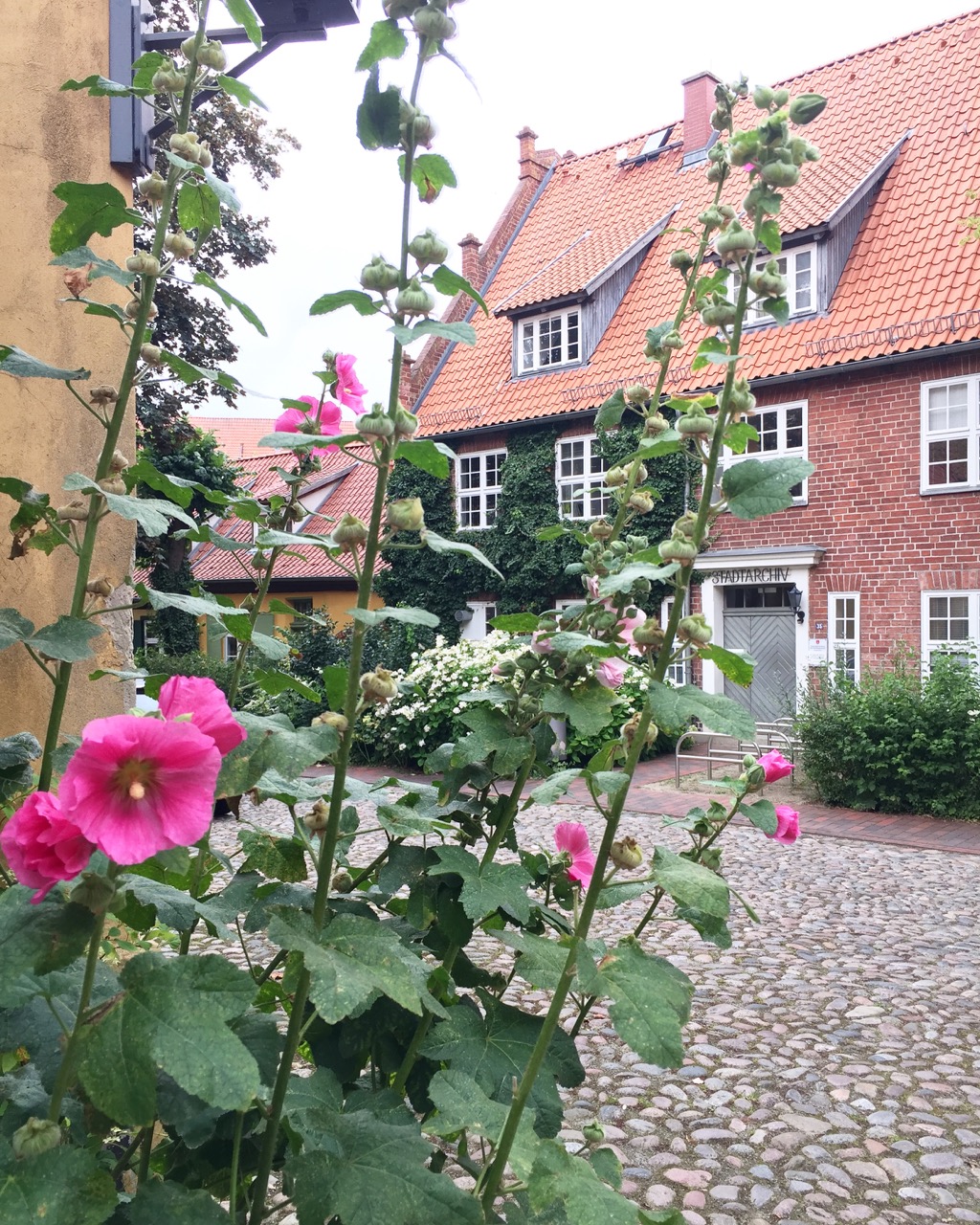 The next stop on on our journey was Stralsund, which is an old Hansa City and again, such an fairy tale town, this time made out of stone buildings. I enjoyed the tour we got of the city. It’s very small as well, with perhaps 60 000 residents and it’s home to a unique set of architecture. The city is complete with cobbled stones, two markets, the old and the new and they’ve done such a great job with preserving the city’s original buildings and architecture. This is definitely a must see as it’s completely magical during summer time. It’s truly like walking in a fairy tale town. (I know I keep saying that but it is! Hence why I love Germany so much!)

The last stop after our tour was a dinner at a local restaurant, Fritz Braugasthaus, that also has loads of local beers and traditional German food. They had two vegan dishes on their menu, one main and one starter. As I was still so full after my heavy lunch I opted for their potato soup.

After that, the time was up for us and we headed back in the car to catch the evening ferry back to Sweden.

To conclude –  advice for visiting Rügen